To share your memory on the wall of Thomas & Nyla Scott, sign in using one of the following options:

Thomas Fredrick Scott was born on February, 17, 1935 near Chambers to Harry and Irene (DeHart) Scott. He attended country school through the 8th grade. He worked on the family farm for a couple years before enlisting in the U.S. Air Force. He enjoyed being stationed in Greece before he was Honorably Discharged on May 1, 1958. Tom then returned to Chambers and worked for Bayne Grubb and the Miller Seed Company. Through the seed company, he met a harvester, Don Zahorsky, and enjoyed that part of the business. Soon, Tom bought his first combine for $2,500 and started his own company. While working in Oklahoma, Tom stopped into a drive inn diner for supper one night, where his car hop was named Nyla Mitts.

Nyla June Mitts was born on May 4, 1943 in Hardtner, Kansas to Charles and Zella (Sanders) Mitts. In 1961, she graduated from Alva High School in Alva, Oklahoma. After graduating, she took a job at a drive inn diner where one night she had a customer named Tom Scott.

Tom enjoyed working, going for walks, and visiting with his friends. Nyla enjoyed reading, crocheting, and cooking for her family. She especially enjoyed making elaborate birthday cakes for her grandchildren. They both truly enjoyed spending time with their family, especially their grandchildren.

To send flowers to the family or plant a tree in memory of Thomas & Nyla Scott, please visit our Heartfelt Sympathies Store.

We encourage you to share your most beloved memories of Thomas & Nyla Scott here, so that the family and other loved ones can always see it. You can upload cherished photographs, or share your favorite stories, and can even comment on those shared by others.

All our Love, Jeff, Kim Staats & family, Darrell, Lori and Mike Bowden, and other have sent flowers to the family of Thomas & Nyla Scott.
Show you care by sending flowers

Flowers were purchased for the family of Thomas & Nyla Scott. Send Flowers

Posted Jun 18, 2020 at 11:54am
Please accept our most heartfelt sympathies for your loss... Our thoughts are with you and your family during this difficult time.

Posted Jun 17, 2020 at 09:28am
Wishing you peace to bring comfort, courage to face the days ahead and loving memories to forever hold in your hearts. 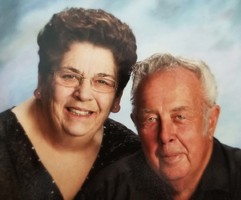