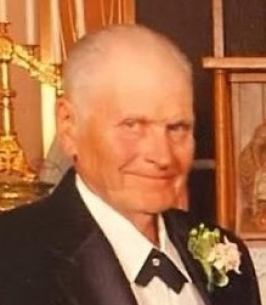 A Celebration of Life Service for Roy Donald Boshart, age 86 of O’Neill, will be 11:00 am Monday, July 11, 2022 at the First United Methodist Church in O’Neill. Pastor Bob Wynn will officiate. Military Rites will follow and be provided by the O’Neill American Legion Simonson Post 93. Visitation will be Monday from 9 am until the time of the service at the church. Private Family Inurnment will be at the O’Neill Cemetery. Roy passed away on Thursday, July 7, 2022 at Good Samaritan Society in Atkinson, NE. Memorials may be directed to the First United Methodist Church of O’Neill. Arrangements are entrusted to Biglin's Mortuary in O’Neill, NE.

Roy Donald Boshart was born October 27, 1935 to Edward and Minnie (Backhaus) Boshart at their rural home North of O’Neill. He attended District #92 Joy Country School through 8th grade. He quit high school his freshman year and continued working on the family ranch until he joined the United States Air Force. He was honorably discharged in April of 1954.

In Roy’s youth, he broke multiple horses for his father. Throughout time, he told of his life experiences with horses, haying, trapping, fishing, and black cows.

Roy is preceded in death by his parents, Edward and Minnie Boshart; older brother, Lester; and son, Edward.