To share your memory on the wall of Clair Kohl, sign in using one of the following options:

Norbert Clair Kohl was born on June 5, 1927 to Norbert and Ethel (Mayberry) Kohl in Council Bluffs, IA. His family later moved to Lincoln, NE. He was in the Army and Merchant Marines from 1945 to 1947, before returning to Lincoln to work various jobs.

He met his wife, Jean Law, in Lincoln, NE and they married on June 3, 1951 at the Sherer family farm west of Orchard, NE. They had three children: two daughters, Rita and Diana, and one son, Dennis. Dennis was born blind and with mental handicaps. The family then moved to St. Louis, MO in 1961. Clair worked various jobs before becoming a truck driver for Orchesln Brother Truck Lines. While living in St. Louis, he was involved in coaching the softball team of his younger daughter, Diana. He raised beagles and ran them in field trials where he and his daughters won trophies and ribbons. He belonged to the Lions Club, The American Legion and The Forty & Eight. He enjoyed fishing, golfing, playing cards, and word search puzzles. He coached an American Legion Baseball team for some years.

Upon his wife’s retirement, they moved to Inman, NE in July 1994. They become members of the Inman United Methodist Church. Clair was church treasurer for a number of years, drove and delivered Meals on Wheels in Inman, delivered the Omaha World Herald newspaper for a time, drove Avera Hospital van for years, and was a co-leader with the Boy Scout Troop of Inman.

Along with their three children, Rita, Dennis, and Diana, Clair and Jean had three grandsons: Jon, Joe, and Corey. His children and grandsons were his life. He did whatever he could for them and enjoyed spending time with them and his 7 great grandchildren.

He was preceded in death by his parents; his wife, Jean Kohl in 2013; sister, Jean (Robert) Snyder; in-laws, Willard & Edna Sherer; and brother-in-law, Evert Law.

To send flowers to the family or plant a tree in memory of Clair Kohl, please visit our Heartfelt Sympathies Store.

Receive notifications about information and event scheduling for Clair Kohl

We encourage you to share your most beloved memories of Clair Kohl here, so that the family and other loved ones can always see it. You can upload cherished photographs, or share your favorite stories, and can even comment on those shared by others. 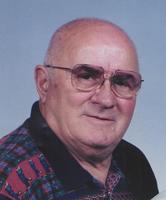