To share your memory on the wall of Mel Selting, sign in using one of the following options:

Melvin Joseph Selting was born January 4, 1928 to Frank and Elizabeth (Dozler) Selting on a farm southeast of Elgin, NE. He was baptized in St. Bonaventure Catholic Church, and in 1945 he graduated from St. John Berchman High School in Raeville, NE.

Mel then served in the U.S. Army Corps of Engineers in the 746 Heavy Shop Company during the Korean War beginning in 1951. Although the army offered to send him to CAL Tech for engineering school, Mel ended his service in 1953 with the rank of Sergeant to help on the family farm. After leaving the service, Mel maintained life-long contact with many of his comrades who served in the Army with him, as those times were some of his most cherished memories.

When Mel returned home, he met his future wife, Patricia Wirges of Elgin, at a dance in Raeville. Because of Pat’s love for anything Irish, Mel knew she would not refuse an engagement ring with a surprise proposal on St. Patrick’s Day. On September 11, 1954, Mel and Pat were married in St. Boniface Church of Elgin. To this union three sons, Michael, John Patrick, and Steven were born as well as three daughters, Elizabeth, Nancy, and Jennifer. Throughout Mel’s lifetime, he was active in his community, church, and family life. Mel farmed in Antelope County at Cedar township. He was President of the School Board for District #120 in Antelope County, served on the Cedar Township Board and ASC Cedar Township Board, and was commander of Elgin’s VFW #5618 in 1967.

In the fall of 1969, the family moved from Elgin to make their home in O’Neill. Mel joined St. Patrick Church where he was on the Parish Council, sang in the choir, and served on several committees. For twenty years, he was the Treasurer of the Knights of Columbus Council #701. Mel was a salesman. He opened and operated The Montgomery Ward Catalog Store until Wards discontinued their catalogs. Then Mel served as a Holt County Supervisor for 12 years, worked for Biglin’s Mortuary part-time, and was an American Legion Commander of Post #93 in O’Neill.

Mel will always be remembered as a devoted husband, father, and grandfather. Even though he left the farm, he never lost his love of growing as his yard and flowers were admired by many. He loved music and dancing; he was a good listener and always there for his family and friends.

He was preceded in death by his son, John Patrick, his parents Frank and Elizabeth Selting, and four sisters Lorene (Jerry) Oberhauser, Delores (Earl) Schulze, Irma (Louis) Hagemann, and Joyce (Joe) Temme, as well as many cherished nieces, nephews, relatives, and friends.

To send flowers to the family or plant a tree in memory of Mel Selting, please visit our Heartfelt Sympathies Store.

Receive notifications about information and event scheduling for Mel Selting

We encourage you to share your most beloved memories of Mel Selting here, so that the family and other loved ones can always see it. You can upload cherished photographs, or share your favorite stories, and can even comment on those shared by others.

Ryan and Bri Kelly, Joseph & Tiffany Mueller Family, and other have sent flowers to the family of Mel Selting.
Show you care by sending flowers

3 trees were planted in the memory of Mel Selting

Posted Nov 01, 2020 at 03:42pm
Our condolences to the Selting family. May precious memories help you through the days ahead. Our sympathy and prayers are with you. ✝️☘️Dennis and Roxanne Ryan
Comment Share
Share via:
LW

Posted Nov 01, 2020 at 03:06pm
Our sympathy and prayers to the family of Mel Selting. Sorry to hear of his passing. I always considered him a fixture around O'Neill and the school. He was at many school activities all the way from athletic events to serving as the resident Santa for the elementary school. He always did it all with a great attitude and seemed to have fun doing the activities. I'm glad I knew him and realize he will be sadly missed by family and friends. Our prayers and thoughts are with all the Seltings. Leroy and Marlene Wiekamp and families
Comment Share
Share via:
RK

Posted Nov 01, 2020 at 07:01am
We are so thankful for the blessings and memories that Mel created with those he touched. His gentle, loving character lives on with his family. 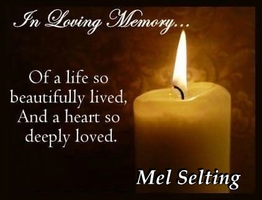