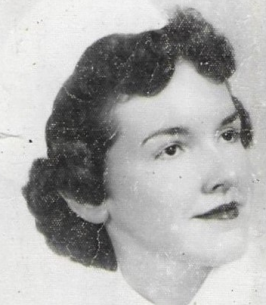 A Funeral Mass for Maureen Rohde, age 87 of O’Neill, will be 10:30 am Wednesday, June 15, 2022 at St. Patrick Catholic Church in O’Neill with Rev. Bernard Starman officiating.  Burial will follow in the O’Neill Cemetery. Visitation will be from 5-7 pm on Tuesday, June 14, 2022 with a 7 pm Parish Rosary. Maureen passed away on Wednesday, June 8, 2022 at Avera St. Anthony’s Hospital in O’Neill. Memorials are suggested to the family for future designation. Arrangements are entrusted to Biglin’s Mortuary of O’Neill, NE.

Maureen Margaret Mahony was born on January 12, 1935 in Cedar Rapids, Nebraska to Charles and Kathryn (Babbit) Mahony. She was the oldest of 14 children. Her family moved to the O’Neill area where she was boarded at St. Mary’s Academy and graduated in 1952. Maureen taught for 1 year before attending St. Katherine’s College of Nursing in Omaha. She graduated in 1955 as a Registered Nurse and then returned to O’Neill.  Maureen always took great pride in being a nurse and her nursing career.

Maureen met Frank Rohde at a dance at the Legion Club in O’Neill. The two were married on September 10, 1957 at St. Patrick’s Catholic Church in O’Neill.  Together, they were blessed with five children; Mark, Terri, Jerome, Peggy, and Michelle. They made their home on the Rohde family homestead 25 miles North of O’Neill until 1974, when they moved to their home 3 miles North of O’Neill. Maureen worked for Avera St. Anthony’s for a time before she worked as a school nurse. She then worked for Valley Hope for 12 more years, until her retirement in 2000. In 2019, Maureen and Frank moved to Country Lane Retirement Village in O’Neill.

Maureen loved deeply, was fiercely loyal, and had a steadfast faith. She loved flowers and gardening and always had one of the most beautiful yards. She also thoroughly enjoyed a good card game and looked forward to her weekly bridge games. Her family and her faith were always at the forefront. She lived her life with honesty, grace, and dignity. She was our “true North” and will leave a legacy of such behind.