To share your memory on the wall of Marvin Ziska, sign in using one of the following options:

Marvin was born March 8, 1930, in Atkinson, NE, to Charles Joseph Ziska and Elizabeth Mary Obermire Ziska. The youngest of five children, he attended Country School District #168, St. Joseph's Catholic High School, and Atkinson High School, graduating in 1947. He enlisted in the U.S. Army in 1947, was discharged in 1949, followed by six years in the Active Reserves. He returned to help his parents on the farm, south of Stuart, NE, until 1951. He moved to Valentine, NE to work at Council Oak Grocery Store until 1952, then began work at the Valentine Republican Newspaper. At a dance at the Crystal Ballroom in Atkinson, a special young lady caught his eye. He asked her to dance, and on June 27, 1953, in the old St. Joseph's Catholic Church in Atkinson, Blanche Bartos became his bride and forever companion. He dearly loved his wife, and said he "could love no other". To this union, three children were born: Beverly Joyce, Doreen Marie, and Daniel Joseph. Marv also cherished his mother-in-law, Antonia. Marv and Blanche made their home in Valentine, until 1958, when they moved to Wayne, NE, where Marvin worked at the Wayne Herald Newspaper, transferring to the O'Neill Frontier Newspaper in 1959, which later became the Frontier and Holt County Independent. Marv retired in 1989. As a couple, Marv and Blanche managed the Royal Theater for a number of years. Upon retirement, they provided litter control on two miles of U.S. Hwy. 20 for 15 years, did volunteer work boxing commodities for seniors for 15 years at CNCS, and delivered prescription medications for O'Neill Family Pharmacy. Marv also worked for a time at Biglin's Mortuary. He was very active in the O'Neill Knights of Columbus, serving as financial secretary, and the hall/bar manager. He bowled for many years, sang in the St. Patrick's Choir, was privileged to sing at many weddings and funerals, and sang in barbershop quartets in Valentine and O'Neill.

Marv enjoyed doing lawn work, gardening, dancing, fishing, hunting, family camping, crocheting (which he learned from his mother), and helping those who could use an extra hand. For many years, he and Blanche provided transportation for patients to out-of-town doctor/hospital appointments, and Marv drove the V.A. van for several years, as well.

To send flowers to the family or plant a tree in memory of Marvin Joseph Ziska, please visit our Heartfelt Sympathies Store.

Receive notifications about information and event scheduling for Marvin

We encourage you to share your most beloved memories of Marvin here, so that the family and other loved ones can always see it. You can upload cherished photographs, or share your favorite stories, and can even comment on those shared by others.

Posted Mar 08, 2021 at 03:44pm
Dear Blanche, Beverly, Doreen, Dan and Families,
We are so saddened to hear about Marvin. I have the fondest memories of spending time with you all starting at age 11 when Bev and I became friends. You took me with you on your camping trip to Pierre, SD. and so many times we traveled to Atkinson to go roller skating and the countless number of times that I got to stay overnight at your home.
I always thought that Marvin and you, Blanche, were the most awesome skaters ever. You danced on those skates like no one I have ever known. I was in awe of you both. Your kindness and goodness has extended throughout the years to so many others. The two of you made such a classy couple in every respect! Marvin will surely be missed so very much by all of us who have been blessed to have know him. Please know that I am remembering Marvin with prayers and you all. I will forever cherish the beautiful memories that I hold in my heart for all of you.
With prayers and love from,
Margaret Schmidt Cotton and Family
Comment Share
Share via:
NN

Posted Feb 10, 2021 at 11:33am
Blanche and Family, We were so saddened to hear of Marvin's passing. Our deepest sympathy to you and your family. I have such good memories of the two of you serving our community with food deliveries, singing (what a gift!), and especially helping so many around out community. Truly our community has been blessed by so-so many things that the two of you did in your lifetime. His smile and his voice reached out to many. He will be missed. Our love to you, Blanche, and to your family. Prayers, Nancy & Paul Nelson
Comment Share
Share via:
SD

Posted Feb 09, 2021 at 04:19pm
Ziska Family, i am sorry to hear of Marv's passing. He was a very kind man and always greeted with a smile. God Bless him and your family.
Comment Share
Share via:
HS

Posted Feb 09, 2021 at 02:21pm
Our thoughts and prayers are with you. Sending you our love during this difficult time.

Flowers were purchased for the family of Marvin Ziska. Send Flowers 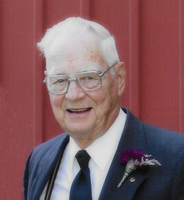