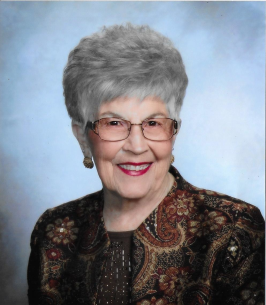 A Funeral Mass for Margaret Straka, age 94, of O’Neill will be 10:30 a.m. Monday, January 10, 2022 at St. Patrick’s Catholic Church in O’Neill. Rev. Jerry Leise and Deacon MJ Kersenbrock will officiate. Burial will follow in the O’Neill Cemetery. Visitation will be from 5-7 p.m. Sunday, January 9, 2022 at Biglin’s Mortuary with a 7 p.m. Rosary. Margaret passed away on Thursday, January 6, 2022 at Avera St. Anthony’s Hospital in O’Neill. Memorials are suggested to St. Patrick’s Catholic Church or St. Mary’s Schools in O’Neill. Arrangements are entrusted to Biglin’s Mortuary of O’Neill.

Margaret Mary Engler was born on May 17, 1927 on a farm three miles northeast of Stuart, the second child of five born to Edwin and Agnes (Simons) Engler. She attended several country schools in the Stuart area. She was a boarder at O’Neill St. Mary’s Academy, graduating in 1944. The biggest entertainment of the time was the 4-H club meetings, school programs, and on Sunday afternoons in the summer, the neighbors gathering to play baseball.

On a nice September Sunday in 1945, Margaret met Alfred Straka on the way home from 4-H camp in O’Neill. They were married on January 16, 1946 at St. Boniface Catholic Church in Stuart. Their first home was a farm eight miles southeast of Atkinson. They later moved to a farm southwest of Atkinson owned by John Coufal, living there for nine years. Margaret worked hard as most farm wives in those days, milking cows, raising chickens and hogs, gardening, canning, haying and much more. Three children were born to this union: Janette, Janene, and Dan.

In November 1957, the land was put in the soil bank so the family moved to Atkinson. Margaret got a job working with Sister Laetitia in the kitchen at the Atkinson Hospital. In February 1960, the family moved six miles north of Atkinson to the Curry Farms. In the Spring of 1962, Alfred’s employment took them to P & P Farms. It was there that Margaret started feeding the hired men. She made breakfast and supper for nine to ten men. The noon meal was for as many as 39 guys. Doing this in a single wide trailer house, she fed them in two shifts. She also sold Avon and Beeline Clothes.

In 1965, Alfred took employment managing a farm for Phoenix Investment Company and they moved eight miles north and two east of Atkinson. In January of 1966, they moved to the Dowd Farms north of O’Neill. Margaret was again cooking for hired men. In 1973 she took a job as office manager of Telemaster Cable TV. When cable TV moved to Grand Island, Margaret went to work at O’Neill City Offices.

Alfred and Margaret took many trips through the years. They loved watching the grandkids and great grandkids activities. Margaret liked an occasional trip to the casino, loved to play Bingo and Texas Hold’Em, and watching sports and game shows on TV.

Alfred passed away in 2008. In April of 2017, Margaret went to live at the Evergreen Assisted Living in O’Neill.

Margaret was preceded in death by her parents, Edwin and Agnes (Simons) Engler; husband, Alfred A. Straka; and brother, Leonard Engler.