To share your memory on the wall of Lettie Krugman, sign in using one of the following options:

Lettie Marilla Tubbs was born on December 30, 1923 in Stuart, Nebraska to Roy and Eleanore (Appleby) Tubbs. She was the oldest of nine children. Her family moved around a lot when she was young and she attended school in Clearwater and Inman through the 10th grade. She then worked as a nanny for several families where she cooked, cleaned houses, and help with the children.

Lettie married Harold C. Sanne on March 19, 1944 in Clearwater, Nebraska. Lettie moved to Baton Rouge, LA to where Harold was stationed with the U.S. Army. Harold soon shipped out to the Pacific Theater and gave the supreme sacrifice on April 20, 1945 on Okinawa, Japan, mere months before the end of the war.

Lettie then returned to Neligh, Nebraska she worked for the 5 & Dime store and eventually she met Fred Krugman. She kept him busy and out of trouble by planning dates for them almost every night. The couple was married on June 8, 1947 in Neligh. Their first two children were born while they lived in Neligh; a daughter, whom they named Linda, and a son, Dale. When Fred’s youngest brother was drafted, Fred and Lettie had the chance to move to the ranch where his parents had lived. They moved to the Red Bird area of Holt County in October of 1950, and his parents retired and moved to O’Neill. In 1955, they celebrated the arrival of their third child, son Gary.

After a few years, they purchased a small ranch 10 miles northeast of O’Neill. In 1960, they moved in and rented a quarter of land from friend Jim Brennan. Lettie enjoyed the ranch life, keeping chickens, milking cows, feeding her family and the help. She also taught Sunday School at Christ Lutheran Church and volunteered at the polling stations during elections. The couple moved to O’Neill in 1984.

Lettie was a member of the Christ Lutheran Church and its Ladies Aide and Quilting groups. Fred and Lettie liked to play cards, square dance, and travel once they retired. They took several bus tours around the country, Canada, Europe, and even traveled to Hawaii in 1982 to watch the Huskers play. She liked to garden, fish, do needle work, and quilt. Lettie made quilts for all of her family. She was also a talented cook and liked to make candies. Lettie loved to spend time with her family, especially her grandchildren.

To send flowers to the family or plant a tree in memory of Lettie Marilla Krugman, please visit our Heartfelt Sympathies Store.

Receive notifications about information and event scheduling for Lettie

We encourage you to share your most beloved memories of Lettie here, so that the family and other loved ones can always see it. You can upload cherished photographs, or share your favorite stories, and can even comment on those shared by others.

Posted Jun 17, 2021 at 10:39am
Fred and Lettie were our neighbors forever. Most of us went to school together. They were friends of my parents. It is hard to believe they are gone now along with my folks as well. My precious memories of Lettie was walking across the section to help her make Kolaches. They were so dang good. especially with mulberry jam on them & of course she sent some home with me. The great days of youth. My condolences to Linda, Dale, and Gary.
Comment Share
Share via:
BK

Posted May 28, 2021 at 09:49am
My Sympathy and Condolences to the entire Krugman Family.
I hold Lettie and Fred in fond memory at Christ Lutheran Church.

Posted May 21, 2021 at 06:56pm
Our sympathy and prayers to the Krugman family. May the Lord give you comfort and peace.

Flowers were purchased for the family of Lettie Krugman. Send Flowers 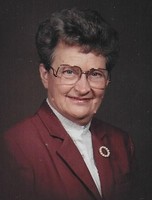