To share your memory on the wall of Lee Tomjack, sign in using one of the following options:

Lee Anthony Tomjack was born in Spalding, NE on July 2, 1960 to Donald “Ted” and Bessie “Betty” Jane (Cameron) Tomjack. Lee grew up in the Goose Lake area where he enjoyed animals, the country life, growing up on the farm, choring, haying and baling hay with his family, countless memories with his neighbors, and being the beloved jokester. He went to Country School District 115 through 8th grade, then went on to graduate from Chambers High School in 1979.

Lee met Nancy Sunderman at a Junior High Dance in Chambers and they later married on April 12, 1980 at St. Patrick Catholic Church in O’Neill, NE. They made their home in the Goose Lake area for a time before moving to the homeplace in August of 1983. The couple milked cows there for over 20 years. He continued to ranch with his son until his passing.

Lee was a member of St. Joseph Catholic Church of Amelia and the Knights of Columbus. He enjoyed hunting, fishing, golfing, playing softball, bowling, darts, and spending time with his family – especially his grandchildren. Lee always had a smile and kind words for everybody and was always willing to lend a helping hand to his neighbors and friends. Lee was a very devout Catholic and lived his faith daily through his actions and conversations.

Lee is survived by his wife of 40 years, Nancy Tomjack, of Chambers, NE; two children, Chris (Michelle) Tomjack of Chambers, NE and Kylee (Will) Beins of Aurora, NE; two granddaughters, Calli and Breckyn Tomjack (with whom Lee always had time for a glass of milk and a piece of Nancy’s chocolate cake); four siblings, William “Bill” (Vicki) Tomjack of Chambers, NE, LaDonna (Larry) Haake of Thedford, NE, Jack (Coleen) Tomjack of Ewing, NE, Greg (Pam) Tomjack of O’Neill, NE; and parents-in-law, Rich and Shirley Sunderman; many nieces and nephews.

Lee is preceded in death by his parents, Donald “Ted” and Bessie “Betty” Jane Tomjack; an infant sister; and sister-in-law, Lisa Tomjack.

To send flowers to the family or plant a tree in memory of Lee Anthony Tomjack, please visit our Heartfelt Sympathies Store.

Receive notifications about information and event scheduling for Lee

We encourage you to share your most beloved memories of Lee here, so that the family and other loved ones can always see it. You can upload cherished photographs, or share your favorite stories, and can even comment on those shared by others.

Posted Mar 01, 2021 at 12:52pm
Nancy & Families: Bob & I send our deepest sympathy & heartfelt prayers & love to you in the loss of your dearly beloved Lee. I didn't know him that well, but from what I'm reading & hearing I know he was a man of deep faith & wonderful husband, father & grandfather to all of you. He'll be with you still & guiding you in the following days.

Posted Feb 28, 2021 at 09:49pm
Thoughts and Prayers to Nancy, Chris, Kylee and family on the loss of a great guy, all the memories watching our families grow up, loving dad and grandfather will deeply miss. Rest In Peace Lee until we all meet again🙏🙏
Comment Share
Share via:
NJ

Posted Feb 28, 2021 at 08:10pm
I met Lee so many years ago at the Goose lake school with the McClain kids. He was an ornery rascal but he always had the same smile no matter how many years went by in between seeing him. I
Comment Share
Share via:
K

Posted Feb 28, 2021 at 08:57am
A lifetime of memories of Lee. Way too many to write. Lee was one of the kindest people I knew. Lee always had a smile, a kind word, and big hug! He was always there for Noel as a friend. He will be greatly missed.
Our deepest sympathies and love,
Kendra Stevens & family
Noel Stevens
Comment Share
Share via:

Posted Feb 27, 2021 at 01:18pm
May God surround you with peace during this time. Lee always had a joke and smile. I think he was the ringleader to many mischievous adventures (the way my dad told it). Our love and prayers.
Laura (Cameron) Adair and family
Comment Share
Share via: 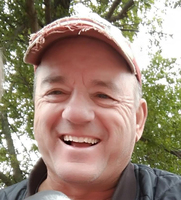