To share your memory on the wall of Kenneth Van Every, sign in using one of the following options:

Kenneth Gerald Van Every was born November 18, 1926 at home in Opportunity, NE to James E and Barbara (Nitz) Van Every. Kenneth attended O’Neill Public Schools through his freshman year, then went to work. He worked for many neighbors around the O’Neill, Page, and Niobrara areas. He obtained his GED in 1981.

Ike joined the Army on June 21, 1945 and was stationed in Germany in a carpenter shop of a hospital. He was honorably discharged on November 18, 1946. He was a member of the American Legion Post 93 for years.

Ike met Frances Grubbs at a dance in Oakview Park. They were married on March 20, 1948 and to this union, 5 children were born. Frances later passed away on December 28, 1973.

Ike rode horses all of his life until his kids told him it was no longer safe. He loved to dance, watch Polka Joe, and Molly B on RFD TV. He liked to play cards and continued to play solitaire until shortly before his death.

To send flowers to the family or plant a tree in memory of Kenneth Gerald Van Every, please visit our Heartfelt Sympathies Store.

Receive notifications about information and event scheduling for Kenneth

We encourage you to share your most beloved memories of Kenneth here, so that the family and other loved ones can always see it. You can upload cherished photographs, or share your favorite stories, and can even comment on those shared by others.

Ben & Carol Doolittle & Boys sent flowers to the family of Kenneth Gerald Van Every.
Show you care by sending flowers

Posted Mar 22, 2021 at 12:54am
Sorry for your loss. Ike(Kenneth) was a great guy and remember how great he treated my Aunt Frances and how great he was to his children. Loved the video of his life. Richard Harris
Comment Share
Share via:
HS

Flowers were purchased for the family of Kenneth Van Every. Send Flowers

Flowers were purchased for the family of Kenneth Van Every. Send Flowers

Posted Mar 20, 2021 at 11:55am
Wishing you peace to bring comfort, courage to face the days ahead and loving memories to forever hold in your hearts. 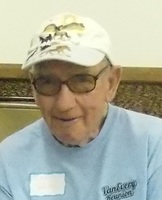