To share your memory on the wall of James Reynoldson, sign in using one of the following options:

To send flowers to the family or plant a tree in memory of James Steven Reynoldson, please visit our Heartfelt Sympathies Store.

Receive notifications about information and event scheduling for James

There are no events scheduled. You can still show your support by sending flowers directly to the family, or planting a memorial tree in memory of James Steven Reynoldson.
Visit the Heartfelt Sympathies Store

We encourage you to share your most beloved memories of James here, so that the family and other loved ones can always see it. You can upload cherished photographs, or share your favorite stories, and can even comment on those shared by others.

Posted Oct 01, 2020 at 09:13pm
Just heard of Steve, never knew of James, classmate and friend from 6th grade on. 46 green Ford coupe and stories to grin about. Happy thoughts to family and us other survivors, we will remember at our next reunion. Gailen Young Class of 63 OHS
Comment Share
Share via:
PB

Posted Jul 31, 2020 at 07:38pm
Enjoyed working with Steve at Prouty Construction he was honest and fair in the game of life! GOD BLESS YA OLE BUDDY!
Comment Share
Share via:
LS

Posted Jul 28, 2020 at 06:45pm
Steve was my first boss at The Jalopy. Drive Inn. He was always supportive and nice to a couple of girls who had no idea what we were doing! My sympathies, Kathy and family.
Comment Share
Share via:
DR 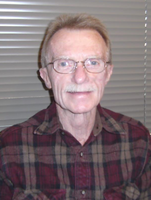