To share your memory on the wall of Ernest Gudenschwager, sign in using one of the following options:

Ernest Gudenschwager Jr. was born on December 9, 1933, to Ernest and Meta (Schwanz) Gudenschwager on the family farm, outside of Hill Point Wisconsin. He followed his sister Mildred and then Delbert, Arlene, Lucille, and Alan completed the family. He attended Meyer’s country school and graduated from Lime Ridge High School, Lime Ridge, Wisconsin in 1951. Ernest grew up helping his dad on the farm. He loved his mother’s cooking, playing sports and reading all the books in the school library.

After graduation, Ernest went to work for Butch Suemnicht at his cheese factory in Plain, WI. In 1953, Ernest joined the United States Army. He was stationed in Austria, then Germany and was honorably discharged in 1955. Ernest returned home and went back to working for Butch at the cheese factory where Butch taught him everything he knew about cheese making.

Ernest left Wisconsin and set out on his own, first finding a job in Renwick, Iowa, where Swede and Helen Swanson “adopted” him and loved him like a son. He also met the love of his life in Renwick, Shirley Nelson, who he married on March 18th, 1961. They began their married life in Orchard, NE. where Ernest along with his partner, Johnny Kiley bought the Orchard Creamery and later built the Orchard Cheese Factory. Ernest and Shirley became the parents of Shelly, Dawn, Jody, and Darin. In 1972, Ernest sold the cheese factory and bought their farm north of Orchard. In 1977, he built the Corsica Cheese Factory in Corsica, SD. For 10 years, he commuted between Orchard and Corsica until he sold it in 1987. He and Shirley retired in 1995.

Ernest loved the Lord and accepted him as his Savior. He led by example and taught his family the importance of prayer, studying the Word and living for Jesus. Ernest attended Faith Community Church and thoroughly enjoyed going to Sunday School and church.

Ernest was a disciplined, hardworking family man that cared deeply for his family and they loved and admired him in return. One of his greatest joys was becoming a Grandpa, he loved attending almost all of the grandchildren’s activities.

Ernest enjoyed fishing, traveling (especially to Canada annually for many years), duck and goose hunting on the Missouri River, traveling with Shirley, reading, eating Shirley’s delicious desserts, gardening, and canning. He also enjoyed watching his favorite teams: the Green Bay Packers and the Huskers. He was also a member of the VFW, participating in parades and Honor Guards.

Waiting at the gates of Heaven to welcome him are his parents; his brother, Delbert; his sister, Lucille Hoy; brother-in-law, Ervin Lentz; his mother and father-in-law, Gerald and Bernice Nelson; in addition to other family and friends.
Read Less

To send flowers to the family or plant a tree in memory of Ernest Gudenschwager Jr., please visit our Heartfelt Sympathies Store.

Receive notifications about information and event scheduling for Ernest

We encourage you to share your most beloved memories of Ernest here, so that the family and other loved ones can always see it. You can upload cherished photographs, or share your favorite stories, and can even comment on those shared by others.

Posted Jun 22, 2020 at 09:57am
Our sympathies to the family of Ernie. Always enjoyed Ernie's comments in our small group at FCC.
The Lorenzes
Comment Share
Share via:
DN

Posted Jun 18, 2020 at 08:06pm
With deepest sympathy, From the Nebraska Cheese Association

Posted Jun 18, 2020 at 06:29pm
So many fun memories. You will be greatly missed, Uncle Ernie, and will always be in my heart. Hugs and prayers to Aunt Shirley and all the family.
Comment Share
Share via:
LC 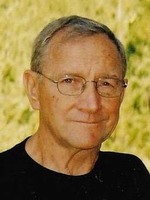