To share your memory on the wall of Eleanora Fisher, sign in using one of the following options:

Eleanora Eva Bredehoeft was born September 27, 1920 to Fred and Inez (Kohler) Bredehoeft in Beemer, Nebraska. In 1923, when Eleanora was a small child, the family moved to a farm three miles north of O’Neill. She was the third of four siblings. She spent most of her childhood helping her father on the farm, milking cows, working alongside him planting and harvesting crops. She attended country school about three fourths of a mile from her home and graduated from O’Neill High School in 1938. Upon graduation, she worked in the Outlaw Grocery Store in O’Neill for a wage of $5.00 a week.

In 1940, she took a job in Birmingham, Alabama working as a bookkeeper at a hardware store where she earned $10 a week. In 1942, she applied for a position in Washington, D.C. working for the Department of Labor. She enjoyed working in Washington and spending time with her great uncle, Nebraska Senator, George Norris for about a year. She was then transferred to the San Francisco, California office where she continued to work till the war ended. She left the high paying government position to become the secretary of Sequoia High School in Redwood City, so she could spend more time with her children.

Just before the war, while on a train trip returning to Nebraska from visit to relatives in Oregon, Eleanora met Charles Fisher, a West Virginia native, and later married him on April 1, 1943 in San Francisco. To this union, three children were born; John, Virginia, and Robert. The family resided in Redwood City until 1959, when they moved to Bassett, Nebraska. Charles was employed as a plumber by commercial plumbing contractors building hospitals and schools throughout the state.

Upon returning to Nebraska, the lived in David City, Broken Bow, and Finally returning to O’Neill in 1975, where Charles installed the plumbing in the new St. Anthony’s Hospital. Eleanora lovingly cared for her aging parents till their deaths. At the same time, she cared for the books and answered the phone for the family’s plumbing business and kept busy in the ministry. She lived a very active life gardening and canning, raising chickens, taking care of grandchildren, and helping out anyone who was in need.

She was preceded in death by her parents, Fred and Inez Bredehoeft; her husband, Charles Fisher in 2000; her son, John Fisher in 1968; one granddaughter, Leah Dawson in 1985; son-in-law, Ray Dawson; one sister, Hazel (Walter) Tomlinson; and one brother, Victor (Nadine) Bredehoeft.
Read Less

To send flowers to the family or plant a tree in memory of Eleanora Eva Fisher, please visit our Heartfelt Sympathies Store.

Receive notifications about information and event scheduling for Eleanora

There are no events scheduled. You can still show your support by sending flowers directly to the family, or planting a memorial tree in memory of Eleanora Eva Fisher.
Visit the Heartfelt Sympathies Store

We encourage you to share your most beloved memories of Eleanora here, so that the family and other loved ones can always see it. You can upload cherished photographs, or share your favorite stories, and can even comment on those shared by others.

Posted Jul 02, 2020 at 12:22pm
Robert and Family, from our Wiese Family, our sincere condolences to you and yours. 99 wonderful and life-lived years it sounds like Eleanora had from reading here. Roger Wiese and family.
Comment Share
Share via:
LS 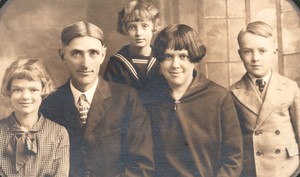