To share your memory on the wall of Eddie Gracey, sign in using one of the following options:

Eddie Gracey was born October 5, 1930 to Edwin and Jennie (Simms) Gracey. He was the 7th of seven boys. Eddie served in the U.S. Army during the Korean conflict and was honorably discharged.

Eddie spent the majority of his working career ranching. He loved good Hereford cattle and good horses. He spent a short time working at a local feed yard before he retired. He was a difficult man to work for at times. There were three ways to do a job. The wrong way, the right way, and the Gracey way. He worked hard and expected others to do the same including his daughters. He called them his “little fellas”. The family worked as a team and when the girls left, Kay kept right on working with him. When working cattle, it was “be quiet and move slow. The cattle will do what you want.” Now they teach people how to work cattle and Dad knew all of this a long time ago.

When Eddie and Kay bought their place east of Bassett, they continued to raise cattle. They bought steers in the spring, summer grazed them and sold in the fall. They both really enjoyed watching the steers grow. Eddie spent a lot of time cutting wood to heat their home. He was always busy doing something. But in the winter, he and Kay enjoyed watching their favorite NFL teams, baseball, the Husker football team, NASCAR, and the National Finals Rodeo. He liked to play 10-point pitch, and playing checkers with Sharon. They could sit for hours studying their next move.

Eddie enjoyed animals and usually there was a favorite cat laying in his recliner with him.

Eddie is survived by his two daughters, Connie Bennett of Ainsworth, Sharon Stiefel and husband, Dean, of Crookston; granddaughter, Tammy Hauser and husband, Lance, and their two children, Braxten and Khloe, all of Marshalltown, Iowa; grandson, Ross Brockley of Valentine; numerous nieces and nephews.

He was preceded in death by his parents; his wife, Kay Gracey; his 6 brothers; and several sisters-in-laws.
Read Less

To send flowers to the family or plant a tree in memory of Eddie Gracey, please visit our Heartfelt Sympathies Store.

Receive notifications about information and event scheduling for Eddie

We encourage you to share your most beloved memories of Eddie here, so that the family and other loved ones can always see it. You can upload cherished photographs, or share your favorite stories, and can even comment on those shared by others. 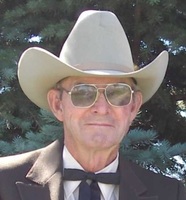