To share your memory on the wall of Dorothy Mlinar, sign in using one of the following options:

Dorothy June Larson was born on June 29, 1922 in rural Stanton at the home of her parents, Leonard and Mattie (Sydow) Larson. When she was young, she went to elementary school in Whitten, South Dakota, then a country school near Winside, Nebraska, before graduating from O’Neill High School in 1940.

Dorothy met Harold Adolph Mlinar at a dance and the couple was later married in the Christ Lutheran parsonage in O’Neill on February 4, 1945. To this union, two daughters were born, Judith Ann and Nancy Lee. Dorothy worked alongside Harold, keeping books for the O’Neill Locker, then Mlinar Feed Service, and their ranch. She also worked for a time as a secretary to the Veteran’s Service officer in the Holt County Courthouse. The couple retired in 1987 and Harold died after a short illness on May 15, 1993. Dorothy moved to Atkinson in 2009.

Dorothy was a talented quilter, making numerous quilts in her life and was an active member of two quilting groups. She liked to read and was an avid crossword puzzle solver. She loved spending time with her family, especially her three grandchildren, who she made many memorable trips with. Dorothy even traveled to Sweden in 2002 for her 80th birthday to meet some of her father’s family.

She was a member of Christ Lutheran Church in O’Neill; where she was a Sunday School Teacher and was active with the Lutheran Women’s group. Dorothy was a 4-H leader, and a member of several extension clubs. She was also a member of the O’Neill American Legion Simonson Post 93 Auxiliary since 1962.

To send flowers to the family or plant a tree in memory of Dorothy June Mlinar, please visit our Heartfelt Sympathies Store.

Receive notifications about information and event scheduling for Dorothy

We encourage you to share your most beloved memories of Dorothy here, so that the family and other loved ones can always see it. You can upload cherished photographs, or share your favorite stories, and can even comment on those shared by others. 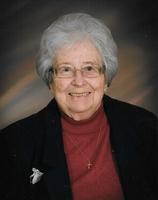