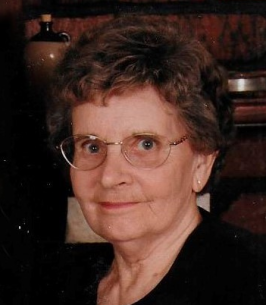 Funeral Services for Dorothy Johnson, age 90, of O’Neill, NE will be 10:30 am Monday, April 11, 2022 at First Presbyterian Church in O’Neill. Pastor Linda Lambert will officiate. Burial will follow in the O’Neill Cemetery. Visitation will be from 3-5 pm Sunday, April 10, 2022, with a 5 pm prayer service at Biglin’s Mortuary in O’Neill. Dorothy passed away on Tuesday, April 5, 2022 at Parkside Manor in Stuart, NE. Memorials may be directed to the family for future designation. Arrangements are entrusted to Biglin’s Mortuary in O’Neill.

Dorothy Fae Howard was born February 10, 1932 in Orchard, Nebraska to Fred and Hilda (Anson) Howard. The family lived on a farm near Venus, Nebraska and later moved to a farm northeast of Orchard. She was baptized in the United Brethren Church in Orchard and later transferred membership to First Presbyterian Church in O’Neill.

Dorothy met Walter Johnson at a dance in Verdigre and they later married on May 22, 1952 in Orchard, Nebraska. To this union, four daughters were born: Linda, Debra, Diane, and Janet. The family moved to their farm north of Page in 1956.  Her life was filled with raising her daughters, and helping her husband on the farm.  No one left her dinner table hungry.  She lived on the family farm until moving with her husband to O’Neill in 2001.

Dorothy was a member of the First Presbyterian Church in O’Neill, the Page American Legion Auxiliary #315 since 1964, and the Eastside Kountry Klub since 1968.

Dorothy is preceded in death by her parents; son-in-law, Robert Duncan; 2 brothers; and an infant sister.