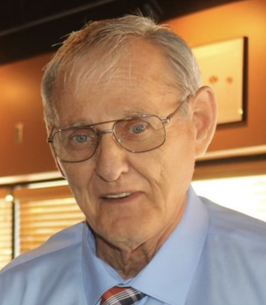 Hey folks, do we have a game for the record books going today!  It’s the bottom of the 9th, 2 outs with the tying run for the home team on first base and up to bat is Dennis Cork.  Cork was the third child of Marge and Lloyd Cork.  Can Cork pull it off?  He’s in the batter’s box and it looks like coach is giving him the signal to swing away!  Cork unloads on the first pitch and goes yard!! The crowd is going wild as Cork was able to pull off the almost impossible!  While Cork is taking his trip around the bases, let’s run through his highlight reel.

As he heads down the first base line, Dennis Eugene Cork was born May 27, 1943 in Page, Nebraska and was raised there.  He attended school at Page High and graduated in 1960.  While in school, Dennis played basketball and baseball.  It’s reported that his love of baseball began at a very young age when he’d grab his glove and a tennis ball and play catch for hours by throwing a ball against the brick wall behind the bank in Page.  After graduating high school, Dennis moved to Seattle, WA where he worked for Boeing until he was drafted into the U.S. Army.

As he rounds first and heads down to second base, Dennis served in the Army from October 1964 to October 1966.  Dennis received the Army Commendation Medal, Armed Forces Expeditionary Medal, the National Defense Medal, and the Good Conduct Medal while serving at Ft. Bragg, North Carolina and in the Dominican Republic.  After his years of service, Dennis returned to Page where he held various jobs from carpentry, working at the race track exercising the horses and then eventually taking on the role of maintenance engineer at the school in Page.  During his tenure at the school, is when Dennis got heavily involved in coaching.  Dennis moved to O’Neill, NE in the 90s and was employed by O’Neill High School, where he continued with his coaching as well as being a familiar face within the halls of the school.

As Dennis taps second base and heads toward 3rd, we’ll discuss his storied coaching career and the lasting impact he had on the young people he connected with through coaching.  Coaching and athletics seemed to be almost a natural part of Dennis’s DNA.  Dennis coached his first “team” the year he graduated high school and the coaching bug stayed with him!  He coached volleyball, basketball, football, track, and was probably most well-known for his time spent on the baseball field.  Dennis also did some officiating at the high school level and even helped do some legion baseball radio broadcasts during his career.  Athletics were important to him and Dennis recognized that coaching and sports did so much more than teach the mechanics of a sport, or the strategy of a sac fly, or a well-executed bunt.  A good coach imparts so many life lessons and helps his kids to understand what it means to really “show up” both in your sport and life in general and especially how to be a good teammate.  Dennis did this with his teams year after year.  Every player who had Dennis Cork as a coach in some capacity has a great story about him and a life nugget gleaned from Coach Cork.  In baseball, Dennis coached the Class B state runner up in 1985, had many state tournament teams, and his team won the Elkhorn Valley League in 1984.  Dennis’s lists of accolades with his teams regardless of the sport is quite impressive and his personal awards received during his coaching career speak volumes about his dedication and commitment!

As Cork rounds third and is headed for home plate the crowd is still cheering wildly about this amazing win and Dennis is wearing a smile a mile wide and waving to the crowd.  This last leg before he crosses home plate marks the latter years of Dennis’s life.   He still had strong ties to the ball fields, the senior center, and the American Legion.  In July of ’93, the baseball field in Page was dedicated to the Cork Family and a special plaque was presented to Dennis for all of the time and energy he invested into the field and the sport of baseball in Page.  He also was named an Admiral in the Great Nebraska Navy in March of 2006.  The NSIAAA also awarded Dennis an Outstanding Service award for his years of coaching. Dennis enjoyed horse races, talking with his sister and brother over the phone and just being Dennis……always with a wry comment that is very fitting for the moment, and a twinkle in those blue eyes.  He was never short on little zingers to spice up a conversation.

Dennis is survived by his brother Richard (Charlene) Cork of Mocksville, North Carolina, and his sister Diane (Charles) Mahony of Spalding, Nebraska; as well as nieces, nephews, great nieces and nephews and three great great nephews and a great great niece. He was preceded in death by his parents Marjorie and Lloyd and his brother Jon.  Although Dennis has played his final inning, this legend of the game will be remembered and loved well into the future.

This obituary is a loving tribute to Dennis Cork created by his niece Mendi Mahony.