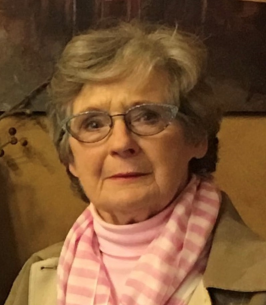 A Private Family Funeral Mass for Elizabeth “Betty” Hamik, age 85, of O’Neill, NE will be 10:30 a.m. Saturday, January 15, 2022 at St. Patrick’s Catholic Church with Rev. Bernard Starman celebrating. The Funeral Mass will be livestreamed for the public at https://holtboydcatholic.org/hamik. Burial will follow in the O’Neill Cemetery. Betty passed away on Tuesday, January 11, 2021 at Kearney Regional Medical Center in Kearney, NE. Memorials may be given to; St. Patrick’s Catholic Church, St. Mary’s Catholic Schools, Golden Age Center, Meals on Wheels or to the Sisters of Mercy. Arrangements are under the direction of Biglin’s Mortuary in O’Neill.

Betty lived aware of the presence of God in her life. On her refrigerator is this quote she read every day and believed: “Good Morning! This is God. I will be handling all of your problems today and I won’t be needing any of YOUR help. Thank You. I love You! God.”

Born into a faith-filled family, Betty was the second daughter of Earl and Agnes (Jansen) Baldwin and lived her early life in Fremont, NE. She had two sisters and two half-brothers. Attending St. Patrick grade school and high school, she graduated valedictorian of her 1954 class. She married Robert Novak in June 1955 and to this union, nine children were born: Cindy, Kris, Terri, T.J., Debra, Scott, Steve, David and Tracy. The marriage dissolved in 1978.

Even more telling than the ‘immediate family’ numbers are Betty’s words to the children: “Get along and be kind.” Betty lived by these words and all who knew her could attest to it. She lived in O’Neill for over 50 years and made a lasting impression on all who knew her.

Betty had many interests. She was an avid Nebraska Husker Volleyball and Football fan, never missing a televised game. Betty loved quilting and quilted many quilts, wall hangings, and table runners for family and friends to treasure. She loved pickle cards, gambling, playing bridge and dominos with friends, and attending many sporting events and activities of her grandchildren and great-grandchildren. She never missed a birthday, always sending cards followed up by a telephone birthday song. She loved being with people, maintaining long-term relationships especially with her high school classmates, and the morning coffee group at McDonald’s and Westside.

Betty lived a life of service to others. She was an avid member of St. Patrick’s Catholic Church, involved in Altar Society, Catholic Daughters, Sacristan, and choir. Betty was also involved in organizing volunteers and delivering Meals on Wheels. She was always willing to lend a helping hand when needed.

Betty was a model of forgiveness for her children and all who knew her. Her sister commented several times that Betty was like their mother, whom many have labeled ‘A Saint’. We are all Blessed by having been in her presence and know her, please share the ‘Good News!’