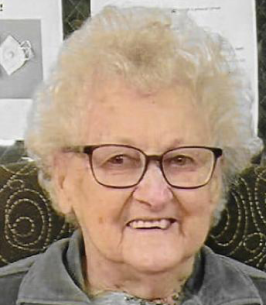 A Funeral Mass for Alice Sobotka, age 90, of O’Neill will be 10:30 am Wednesday, June 22, 2022 at St. Patrick’s Catholic Church in O’Neill with burial to follow in the O’Neill Cemetery.  Father Bernard Starman will officiate.  The service will be live-streamed at holtboydcatholic.org/Sobotka Visitation will be from 5-7 pm Tuesday, June 21, 2022 at Biglin’s Mortuary in O’Neill with a 7 pm Parish Rosary.  In her quiet and graceful way, on June 16, 2022 Alice Sobotka passed away peacefully with family by her side at the Alpine Village in Verdigre.  Memorials may be directed to her family for future designation.  Arrangements are entrusted to Biglin’s Mortuary.

Alice Darlene Whaley was the youngest of four daughters born to Lloyd and Bessie (Wesley) Whaley on January 22, 1932 in their rural farm home Northeast of O’Neill.  She attended District 62 country school and then graduated from O’Neill High School in 1949.  While in high school Alice boarded at a small house under the water tower.  She also went to State in 4H for record keeping.

Alice met Eugene Sobotka at a Rural Youth dance.  The couple later married on June 1, 1953 at St. Patrick’s Catholic Church after his return from the Korean War.  Alice's sister Twila also met her husband Clifford Sobotka, Eugene's brother, at these same rural youth dances.  Alice and Eugene settled in a farm house two miles west of Inman where together they raised nine children on the farm they built together.

Before and after they were married, Alice taught in multiple one-room district schools.  Alice and Eugene raised livestock, milked cows, and grew vast gardens.  She took great pride in being able to provide “home grown” food for their growing family.  When Alice was not tending to the many chores or running lunch to family in the hayfield, she enjoyed spending time with her children and sewing.  Later she made baby blankets and quilts for all of her 24 grandchildren.

Alice was a member of the Holt County VFW Post 926 Auxiliary, serving for a time as the President.  She was also a member of the Inman extension club and a quilting club.

She was loved by many friends, neighbors, and caregivers, including the staff at The Evergreen Assisted Living and Alpine Village.